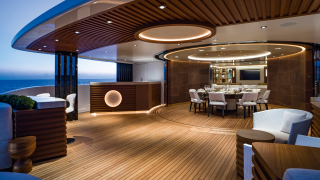 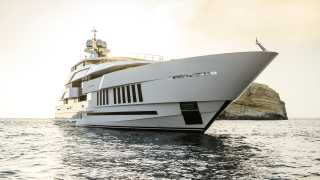 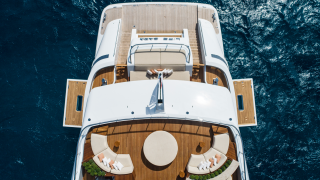 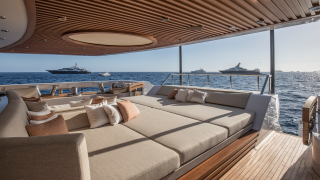 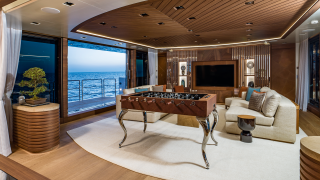 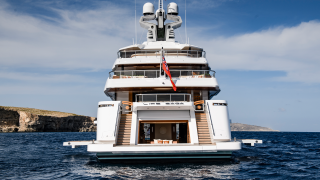 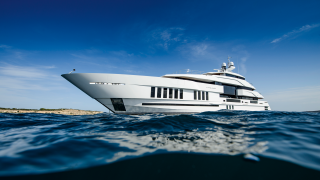 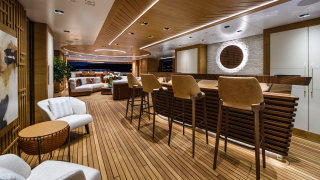 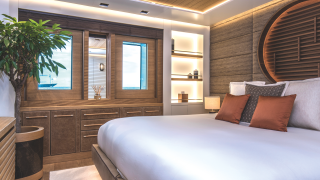 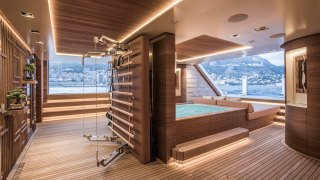 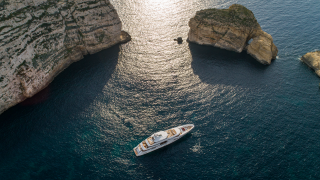 Life Saga: On Board the 65 Metre Admiral Superyacht

Step on board 65 metre Life Saga with Risa Merl for an exclusive look at the new Admiral superyacht...

"Zero showing off and totally functional," says the owner of Life Saga when asked about his brief for the new 65-metre Admiral superyacht. Functionality is personal – what’s practical to one owner might be the epitome of dysfunction for another. For the owner of Life Saga, it meant creating a boat that suited the way he uses his ever-growing fleet and his relaxed onboard lifestyle, which mandates spending as much time outside as possible.

Life Saga, designed by the builder – which is part of The Italian Sea Group – with interiors by Mark Berryman, is the latest in this experienced owner’s fleet. He owns the original 42.4-metre Life Saga, built by Heesen in 1994, a 47.5-metre support vessel Mystere Shadow and a 20-metre custom-built Maori motor yacht that he likes to drive himself. And then there are the many toys and tenders that are stowed on his shadow boat, including a limo tender, massive RIB and two 15-metre dayboats. This is an owner who truly loves living and playing on the water.

“The boss doesn’t go indoors unless the weather is diabolical,” says Life Saga’s captain, Chris Delves, who has worked with the owner for 10 years. “He spends all his time on the aft deck, so we decided to make the aft deck as large as possible.” This desire to maximise time spent outdoors is obvious the moment you step on board Life Saga.

The main deck is “the sea deck” – an open-air, casual space that keeps the owner connected to the sea and pushes the boundaries of conventional yacht layout. An indoor/outdoor aft deck living area takes over the majority of the level, with hardly a formal saloon in sight. Instead, you are greeted by an enormous aft sunpad leading into a covered deck area with flexible seating (the owner hates fixed furniture, says Captain Delves) and a curved bar to port. The area looks like a casual saloon, until you notice the retractable glass partitions to three sides that open fully – and that there is no watertight door at the normal barrier between inside and outside. This design blurs the line between aft deck and saloon.

The use of materials typically found outside, such as teak and durable fabrics on soft goods, solidifies its intended use as an outdoor living area. When the owner does go inside, he turns off the air-conditioning. Life Saga has been designed to suit this need, with opening windows and a separate air con unit to keep the audiovisual equipment cool.

Forward on this level is a small saloon with a sofa and bespoke table football game – a place to relax during the day. Sliding glass doors to port and starboard open up this saloon as well, and when the side balconies unfold, the connection to the sea is further emphasised. Glass dividers throughout Life Saga create the feeling of one seamless living space, which flows from one area to the next, from indoors to out. “The boundaries between indoor and outdoor are really very thin,” says Gian Marco Campanino, Admiral’s in-house designer.

At 65 metres and 1,195GT, it’s quite a step up from the owner’s previous boat. “I have a relatively big fleet and wanted to maximise the usability when travelling alone, without the usual support,” says the owner. In building a bigger Life Saga, the owner is reimagining the way his fleet is used – previously, the 42.4 metre was the “hotel boat”, but now Mystere Shadow is being refitted with more guest cabins. The new Life Saga is just for him and his family. As proof that this owner has no interest in showing off, when guests visit they will sleep on board Mystere Shadow and might never step foot on board Life Saga.

This is also the owner’s first new build. “The other boats he calls ‘adopted kids’ – he’s refitted them – but this is his baby,” says Delves. Life Saga I was 36 metres when purchased, and he lengthened and widened her. The new Life Saga project has been six years in the making, says Delves, who travelled to shipyards all around Europe and the US to find the right builder. After considering yards like Amels and Ulstein, sales broker Alex Banning of SuperYachtsMonaco introduced the owner to Admiral – The Italian Sea Group. Delves had his doubts about working with an Italian yard, but he says the build process and end result have “exceeded my expectations”. The owner’s rep and Delves, who served as build captain, pushed the yard to new heights in its quality of finishes and flexibility of layout. Life Saga has become a showpiece and set a new standard for the Italian builder.

The owner sought an exterior that “combines classic and modern forms and shows an athletic character”, he says. The owner also influenced the look of Life Saga’s muscular, sculpted mast – a piece of art in itself. “The idea was to have the shape of two cupped hands that meet at the knuckles but don’t touch,” says Campanino.

Though the owner doesn’t particularly care to show off, Life Saga’s exterior will likely turn a few heads. From the outside, she is reminiscent of a previous Admiral boat, Ouranos, which was launched in 2016. Both have double-height glass at the centre of the superstructure, with side decks removed to provide unfettered views. This design tactic also creates an unusual exterior profile, with a swathe of black glazing as a wide stripe down the middle of each side. “The full- length windows are treated as you would in a skyscraper; there are no seals,” says Campanino. But, according to the yard, they are not sisterships. Ouranos, part of Admiral’s C-Force 50 series, is 49.6 metres, has three decks and a gross tonnage just under 500GT. Life Saga is much larger, at 65 metres, four decks and more than twice the volume at 1,195GT.

Inside, the layout went through 20 revisions, says Delves. The owner doesn’t like “smells, noise or vibration”, so one change was moving the galley from the main deck down to the lower deck. Van Cappellen was employed to help the yard in minimising noise and vibration, including tripling insulation and installing thick engine beds to disperse vibration.

The interior style is not a big departure from that of Life Saga I: it’s wood-filled, timeless and easy to maintain. UK designer Mark Berryman originally pitched to the owner two years ago. “We were told he liked it, but the project never happened. Then two years later we got a call,” he says. “We were very lucky, as the client’s brief fell beautifully within our ideals for a yacht interior.”

The relaxing and homely interior is a mix of warm, neutral colours and soft, textured fabrics. “Imagine a cappuccino,” the owner said to Berryman, “with a little more milk in some areas and a little less milk in others.” The result is a restrained yet still rich palette, with chocolate and coffee-coloured leathers and the warm tones of European oak, teak and walnut. Walls are adorned in beautiful geometric leather panels, made in Admiral’s upholstery workshop. Berryman employed his trademark Asian influences, and he used quite a lot of Italian-designed loose furniture to give a very clean and contemporary feel to the interior. “The owner likes rooms that can transform. He likes variety and not having the same set-up every day,” says Delves.

All the built-in pieces, such as beds and bedside tables, were made by Admiral. “We also designed all the sofas and Admiral made these for us,” says Berryman. Coffee tables, bar stools and planters were custom made by an Italian company called Belvedere. Chairs and armchairs were bought off the shelf, mainly from Italian companies.

The owner also hates duplication, hence there is only one dining table on board, a rarity for a yacht of this size. This table is found on the upper deck, known as the “apre?s-soleil” or after- sun deck – a more formal space with a bar, saloon and indoor/outdoor dining area. The latter is surrounded by circular glass, which can stay closed or retract to fully open the area. The bar, set forward and to starboard, was reduced in size and moved further to starboard in order to accommodate a VIP cabin to port. This wow-worthy cabin takes full advantage of the floor-to-ceiling windows.

On the lower deck are two cabins with king- size beds that convert into twins. The lower-deck VIP, intended to be used by the owner’s son, is configured as one full-beam cabin with a bedroom and lounge, but it can be divided to create another guest cabin.

Berryman’s favourite space on board is the owner’s suite. The room has striking pillars adorned with a metal finish and covered in glass, which gives the effect of molten rock. Originally, the bed was off-set to starboard, with the bathroom separated by a glass screen to port. In reworking the space, the bed was moved to just off the centreline, and the bathroom is forward. This allowed a seating area to be added to port. “The master has a lovely airy, open feel and the full-height windows flanking both sides allow for fantastic views,” says Berryman.

Initially, the office was set just inside the entrance to the owner’s suite, but this door was moved so the office now precedes the master, so that his wife won’t be disturbed in the morning. Delves doesn’t expect the office will see much use, though. “[The owner] doesn’t work a lot when he’s on board. All he does is swim and wakesurf – his favourite things to do.”

The owner hasn’t even slept in the master yet. “He’s using each part of the boat week by week. He’ll spend time exclusively on the sundeck, then venture to the upper deck. He tells me, ‘Relax, I’ve got time’,” says Delves. “He slept outdoors a lot on Life Saga I. Once, he even spent the night in a tent that was set up on the floating trampoline.”

Life Saga will rarely go into port. “In 10 years, we’ve maybe been in port three times with the owner,” says Delves. The owner will spend at least five months on board each year, extending the season later and later. “[Last] year we didn’t finish until the end of November,” says Delves. “We’ve been following the sun down to Sardinia, Malta and Turkey as well.” Delves predicts the owner will go further afield in the future, with sights set on Asia or the South Pacific. This isn’t likely to be his last Life Saga, either. “He’s got an 80 metre in him somewhere,” says Delves. “And he’s only 50 years old, so he has time.”

For now, the owner is making good use of enjoying every bit of his purpose-built yacht. “Every space is my favourite because I wanted to build a boat myself, for myself, and to have only what makes me happy,” says the owner. Life Saga proves that, when applied correctly, a simple brief like “functionality” can produce a stunning yacht that is perfectly suited to her owner – nothing more, nothing less.

Sussurro: On Board the Historic 50 Metre Feadship Yacht

48 Dolceriva: On Board the New 15 metre Riva Motor Yacht

Archelon: On Board the 37 Metre Oyster Sailing Yacht

Oasis: On Board the 60 Metre Superyacht by Lu?rssen

Connect With Us On

Back to previous page