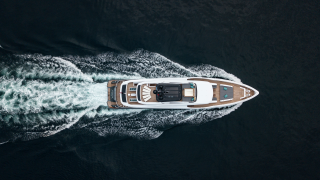 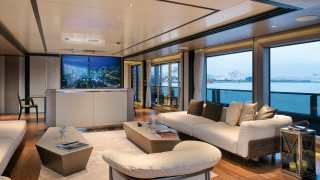 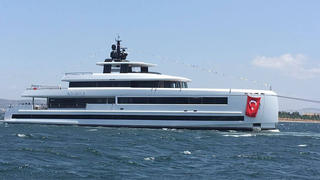 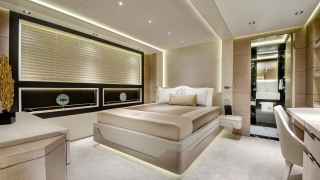 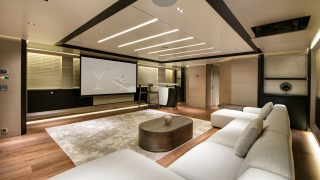 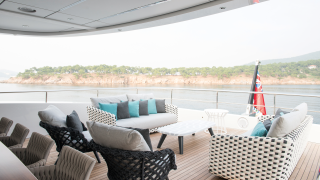 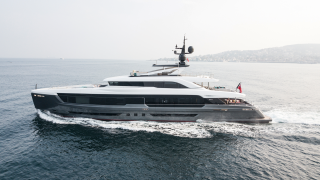 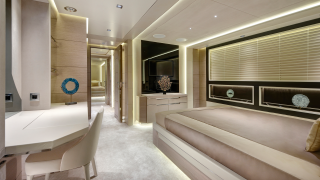 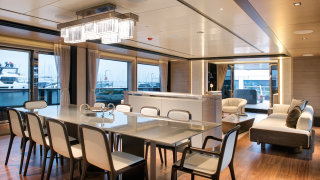 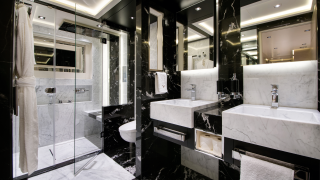 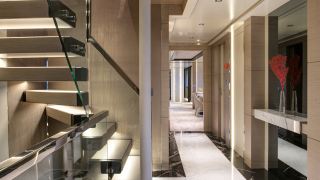 Virtus 44: On Board the 44 Metre Mengi-Yay Yacht

When Hüseyin Mengi joined the family boatbuilding business in 1983, it was still producing wooden fishing and rowing boats in the Golden Horn district of Istanbul, Turkey. He was 11 years old and began as an apprentice carpenter. Now, more than 35 years later, the boatyard has become a shipyard turning out 40-metre yachts in steel, aluminium and composite. Every now and then, Mengi still likes to pull on overalls and join the carpenters in the dust of the shop floor, but today he is smartly dressed to receive me and a potential Russian client on board his latest creation: the Virtus 44.

I visit the boat early one morning in Pendik, part of the urban sprawl on Istanbul’s Asian coast, and the rusty heart of Turkey’s boatbuilding industry. The Virtus floats at the end of a long pontoon in a berth said to match the South of France in terms of price, if not the splendour of the coastline. We climb on board a neighbouring ketch, also built by Mengi Yay, to get a better look. The perspective allows us to take in the elegant line of her bevelled superstructure and the apparently seamless glazing that runs nearly the full length of the main deck. The uneven line of the bulwarks might offend design purists, but to my eyes it has been well concealed by the two-tone paintwork – white above and a slightly military grey below.

Just like her sister ship, the impressive 45-metre Aquarius, she looks as if she would give anything built by the Italian yards a run for its money. Perhaps it’s little wonder, with the exterior lines and the interior design both coming from the drawing board of Paolo Dose, of VYD Studio in Trieste. “The first concept was a little bit different,” he says. “The design at the start was more sharpened, geometrical; then we made it a little more curved and feminine. It’s a mix.

“We had the fortune of not needing to rush, and when you have more time the result is better. The first design was around 40 metres, then it grew. The shipyard was clever in this case, because they understood it was better to go closer to 500GT, which came to a length of around 44 metres.”

And here, in a nutshell, is one of this boat’s defining characteristics. It offers phenomenal volume just shy of the 500GT cut-off, including four good-sized cabins on the lower deck and a generous master suite filling the forward end of the main deck. It is, as broker David Legrand of Fraser notes, the sort of space more normally associated with 50- to 55-metre yachts. “Mengi Yay have come late to the game, so I’ve told them to go slowly and get it right,” he says.

That volume comes courtesy of towering topsides, a main deck that fills nearly the full length of the boat and a broad, almost nine-metre beam. Then there’s a large upper deck featuring a comfy upper saloon and bar with a drop-down cinema screen, plus a big outside area with room for 10 to dine or lounge. It is all crowned with an 74-square-metre open sundeck, fitted with a spa pool and hardtop.

Dose says he designs the exterior first, but spends far more time on the interior, because that is where guests will spend most of their time aboard. “It is our ethic to design something that’s realistic and functional. Everything has to work. It’s elegant, but cosy. When all the curtains are drawn, it feels like a house by the sea.”

Perhaps “mansion by the sea” would be a better description, as the Virtus has made ample use of balconies to create more usable space. The bulwarks on either side of the main saloon fold down, for instance, with glass that you can walk on. There is also a 52-square-metre beach club. A deep fold-down balcony on the starboard side communicates with the bathing platform and brings light and air inside. Meanwhile, the back door of the beach club folds down into prime sea-level real estate, including an integrated Transformer platform. There’s also a dayhead and bar here.

The Russian client, who has owned smaller yachts in the past and runs his own fleet of commercial bulk carriers, tells me that this is one of the key attractions of the boat. “If you want to spend a lot of time living on the yacht, then this is the right boat,” he says. “I will spend three to four months per year.” Allowing nosy journalists and time-pressed clients to meet and discuss the boat seems in line with the honest, open attitude of this family-run yard.

Mengi uses the term “explorer” in our conversation about the boat, but this is a bit of artistic licence. The Virtus is a solid sea yacht, however, and has the technical spec to prove it. At an economical 10 knots, her 44,000-litre fuel tankage gives a range of 2,900 nautical miles – theoretically enough to sail from the Canary Islands to the Caribbean. The yacht is also fitted with four ABT-TRAC zero-speed stabilisers for comfort at sea. It has a huge walk-in cold room and freezer, with rubbish-compaction space to match, giving extended cruising possibilities. And the side-opening garage to port has an Opacmare crane that can lift a tender up to 1.5 tonnes and five metres long. There is further space for toys and water sports equipment.

Much of this economical performance is the work of Jaron Ginton, the Dutch naval architect who designed the hull below the waterline. The brief to him was short and sweet: “A good seaboat with a steel hull, not wood,” he explains.

“It was to be a quiet boat, with full range and commercial registration.” There was no tank testing, but Ginton dipped into his archive for a similar project from which to work. The chosen hull shape had a round bilge, with a pronounced spray railing at the bow above the waterline, because the near-vertical bow produces lots of spray. “Then a short bulbous bow – short because we didn’t want to make the boat longer – and a shallow stern with trim wedge. We also have long skegs that are deeper aft than at the front to allow bigger propellers with more hull clearance.”

This last detail is important, because larger propellers don’t have to rotate so quickly to generate thrust, and they don’t churn so much wash against the hull. Both of these features make for a quieter boat – something Mengi Yay is very proud of. The Virtus not only satisfies LY3 requirements, with features such as sealed compartments for buoyancy in the event of hull damage, but it also meets RINA’s tight Comfort Class rules for quiet boats. So the generators are installed on hefty rubber dampers, while acoustic insulation is built into each room below deck. “This is basically a quiet boat,” the potential client confirms as he emerges from the owner’s suite, with the twin Cat C32 engines maxed out at 2,280rpm.

The boat was built on spec with advice from Legrand at Fraser, who sees it as an investment in building his portfolio of 40-metre yachts. “These are no Feadships, but selling well-built Turkish vessels is good business,” he confirms. “They already have interest for a 65-metre boat, but I am telling them ‘Please stay small for the moment. Go slowly and get it right.’”

Mengi believes that potential clients in this sector don’t want to wait years for their yacht to be designed, built and delivered. “We realised that the demand from the market is for a ready-made product. Clients want to take it off the shelf, not wait two to three years.” Naturally, the Virtus can be heavily customised for an owner, he adds, but that is not what most clients want.

This means that none of the rooms on board is completely finished. The joinery, paint, leather, wallpaper and copious stainless-steel decorative work is all there and perfect, but every space is awaiting the signature flourish of an owner. That large saloon, for instance, has been delicately finished with walnut floors and a mixture of black and grey stained oak cabinetry. But there are three alcoves which stand empty, awaiting a feature piece of art. They have been finished with handmade wallpaper covered in strands of natural cork picked out in metallic silver paint – a striking design by US-based Maya Romanoff.

“There are warm tones everywhere and small contrasts, but not too much,” designer Dose explains. “The wood and leather come from Italy; there’s natural oak and smoked chestnut leathers by Foglizzo. The yard imposed no limitations with the materials.”

He admits it was difficult designing an appealing interior without an owner involved. “We tried to make something for the market – not to give it too much personality, too much colour or too much grain. With artwork and accessories, you can add the final touches with the owner.”

The pie?ce de re?sistance is undoubtedly the 40-square-metre owner’s suite, running the full beam of the forward part of the main deck. With large windows, the natural light is excellent, as it is in the adjoining office, where a desk looks out through floor- to-ceiling glass. “The owner has to enjoy working here – that’s the main mentality,” Bas?ar says. The space has been thoughtfully designed for confidentiality, with sliding soundproof doors to separate it from the cabin and the dressing room. The potential client sums it up nicely: “Neither crew nor passengers can disturb you.”

I ask him what he thinks about the boat as a whole, and he ponders my question for some time before answering. “I was once told that people first buy British plastic; then Italian; then perhaps Dutch or German,” he says carefully. “I believe they’ve missed something out in between: Turkish. To me, Mengi Yay is closer to Italian.”

Sussurro: On Board the Historic 50 Metre Feadship Yacht

48 Dolceriva: On Board the New 15 metre Riva Motor Yacht

Archelon: On Board the 37 Metre Oyster Sailing Yacht

Oasis: On Board the 60 Metre Superyacht by Lu?rssen

Connect With Us On

Back to previous page